John Bate was born a slave near Louisville in 1854. His family was given their freedom in 1862 and they moved to Louisville. Through the efforts and encouragement of a lady named Kate Gilbert, Bate began school. Though he quit to earn money to help the family, he saved enough to start college.

Bate attended Berea College and came to Danville one summer to teach summer school. He taught in a one-room school. He stayed on as a teacher and principal for fifty-eight years. The school grew over the years to serve as many as 600 students. A high school was added for grades nine through twelve.

When the Danville Schools integrated in 1964 Bate became Bate Junior High. In 1978 a new building was constructed behind the site of the original school and Danville Bate Middle School opened. It was one of the first middle schools in the state designed to meet the unique needs of the adolescents. 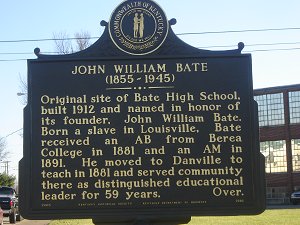